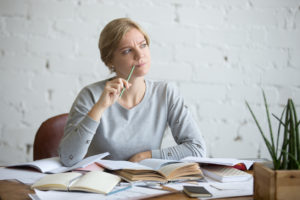 Lots of good writers have difficulty with homophones—words that sound alike, but have different meanings and spelling. Hear and here is one example—there are lots more.

Spelling and grammar checkers have come a long way but are still fallible, especially when it comes to homophones. The  Spell Checker poem, which has been circulating since 1991, illustrates how a spell checker can be fooled. Go ahead and give it a try, your spell checker will only pick up two or three errors. Here are the first three stanzas:

Candidate for a Pullet Surprise
by Mark Eckman and Jerrold H. Zar

I have a spelling checker,
It came with my PC.
It plane lee marks four my revue
Miss steaks aye can knot sea.

Eye ran this poem threw it,
Your sure reel glad two no.
Its vary polished in it’s weigh.
My checker tolled me sew.

A checker is a bless sing,
It freeze yew lodes of thyme.
It helps me right awl stiles two reed,
And aides me when eye rime.

If you tend to mix up homophones, one great way to learn them is by using mnemonics. Here are some helpful ones:

Accept means to take or receive. Since you can only receive something by acknowledging it remember that both accept and acknowledge start with ac.

Except means something exceptional because it’s one of the few words that contains the letter x.

Advice is a noun, and advise is a verb. Remember that advice has ice in it, and ice is a noun.

Most of the time in business writing we use affect as a verb and effect as a noun. Remember that affect is an action word. Both affect and action start with the letter a.

To complicate this, affect can be a noun meaning feeling or emotion. It’s a technical psychological word and is rarely used in business writing. Similarly effect can be a verb, you can effect change. Again, this is more rarely used.

Another mnemonic for complement: when one thing complements another, it usually enhances it in some way. It makes the other thing even better.  Enhance starts with an e, so just remember that if one thing is enhancing another, it complements.

It’s is always the contraction for it is or it has. If you can change the its to it is, then you need the apostrophe. If you can’t remember this please write the definitions and spellings on a sticky note and put it on your monitor until you memorize it. One small apostrophe can cost you your credibility. Don’t let it happen!

My tooth is loose. Both have oo.

Principle is a rule of action or conduct.

Remember that we use stationery to write letters—both contain er.

Than is always used to compare two things. Both have an a.

Then always refers to time. Both have an e.

They’re is the easiest of the three because it’s a contraction for they are. If you can say they are in place of they’re then you are using it correctly. But if they are just doesn’t work, then you’ll need to look to one of the other spellings of this word.

There is not here, but it contains here. Remember that both words refer to a location.

Their is a possessive pronoun–it’s used to show that someone owns something. You might remember that heir (inside their) implies future ownership. But if that doesn’t work for you, just choose their by elimination.

First, you can remember  two with a three:  All three of these homophones have the letters t and o in them, but only one has the letter w. If you turn w on its side (counterclockwise), it looks like a 3, which, like two, is a number (t3o).

Second, remember  two with a two. Think “two, twice, and twin.”  All refer to a pair, and all start with tw.

Third, remember two has wings, which always come in pairs.

Too is like 100 degrees F, which is too hot.  To is always a direction.

Do you have any other helpful mnemonics? Share them in the comments.

Find out how our writing, presentation and meeting skills workshops can help improve communication, productivity and effectiveness
GET IN TOUCH